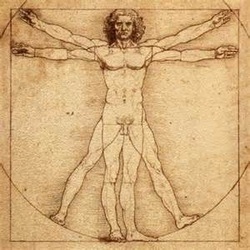 A lesser known aspect of the world that Da Vinci contributed to greatly was the medical world. One specific area that he focused on was the human anatomy. During his lifetime, Leonardo dissected at least 30 corpses—both diseased and healthy—as to get a full understanding of the human body. Several people such as Plato and Aristotle had studied the topic beforehand, yet Da Vinci was among the first to provide both accurate drawings and explanations of the anatomy. This is evident from Leonardo’s sketch of the Vitruvian Man. The Vitruvian Man is a drawing of a man who is standing in the middle of a circle and a square. This man is depicted in two different poses, which gives an exact representation of the proportions of the human body. The Vitruvian Man is but a page in notebooks that were full of information about the human body. Da Vinci intended for these notebooks to be used in the medical field. However, these books didn’t take its desirable impact until the 1900s, when two of Leonardo’s notebooks were rediscovered in 1965. In it lay many of Leonardo’s sketches and ideas, which led to the invention and use of many medical methods used today. 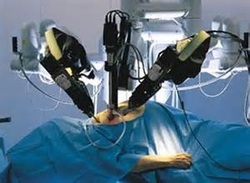 One of the most famous robots found Da Vinci's notebooks is called Leonardo’s Robot. It was designed as a suit of armor that could stand, sit, wave its arms, and raise its visor through a series of pulleys and mechanics. In 2002, Mark Rosheim built a prototype of Leonardo’s Robot called the Robotic Knight. His prototype was successful, showing us that Leonardo had a full understanding of how the human body and joints worked in order to design the robot. Leonardo’s Robot and his accurate sketches of the human anatomy inspired scientists today to create a surgical robot. The surgical robot was named after Da Vinci and is used today to perform many surgeries such as heart surgery, prostate surgery, hysterectomies, and joint-replacements. This is beneficial to us because it has shown to increase the surgical precision of a doctor, minimize incision size, lessen the risk of transfusion, shorten recovery time, and provide a better environment for doctors by reducing strain and fatigue.

Da Vinci also contributed to the development of artificial limbs and synthetic organs. His studies on how limbs and organs work have influenced scientists today to create “replacements” of body parts in order for people to function normally. 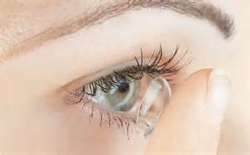